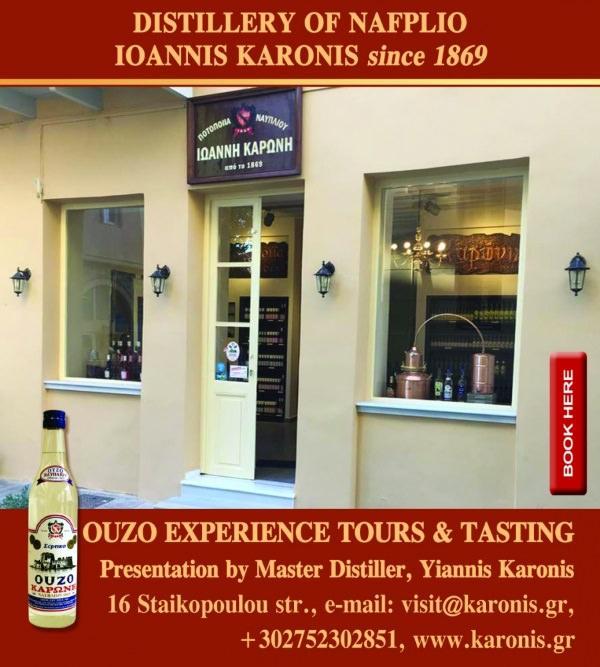 Not long after the constitution of the official Greek nation, in 1860, Yiannis Karonis opened and runs an off license.After many different stages and with his dedicated love for the production of ouzo Karonis installed two stills and entered into the secrets of distilling....

Yiannis Karonis gave flesh and bone to his business, and in 1869 he officially established Karonis Distilleries. Showing the way as pioneers the Karonis brothers also set up an alcohol production unit using stills, instruments and machinery from France and Germany in an ultra modern factory for the times.
Italian technicians installed the stills and a series of specially built reservoirs. The alcohol was used in the distilling and production of Ouzo and Masticha and in those days the business was known as the "Pnematopoleio Tegea".
It wasn't long before Karonis became well known confirmed by a discriminations report from the Zappeio, Athens in 1889.

Gold and silver medals followed in International exhibitions held in Thessaloniki, a fact that sealed the quality of the distillery and its products.Production increases and the boundaries widen from just the town of Nafplion, deliveries are made to the surrounding areas by boat and train. In 1947 the Karonis Distillery becomes the proud owner of its first lorry making the Karonis products available to a still wider audience.Yiannis Karonis perseverance in the achievement of optimising quality led to the use of the best varieties of aniseed and other aromatic ingredients giving the following 4 generations the precious recipe of Karonis Ouzo which remains to this day unchanged. With the same passion and taste, faithful guardians of tradition, now the fifth generation of the family Karonis continues to offer the tastes of this unique distillery...